The term corpoanarchy is a neologism; it wants to claim existence as a new word, whilst also revealing the process of translation and ‘untranslatability.’ The word itself follows the semiological structure of the phrase corporeal or corporeus in Latin which means ‘from the body’ (from corpus “body”). Here, ‘real’ has been replaced with the anarchy, and the combination is defined as: ‘the performative refusal of the body on a molecular level’. 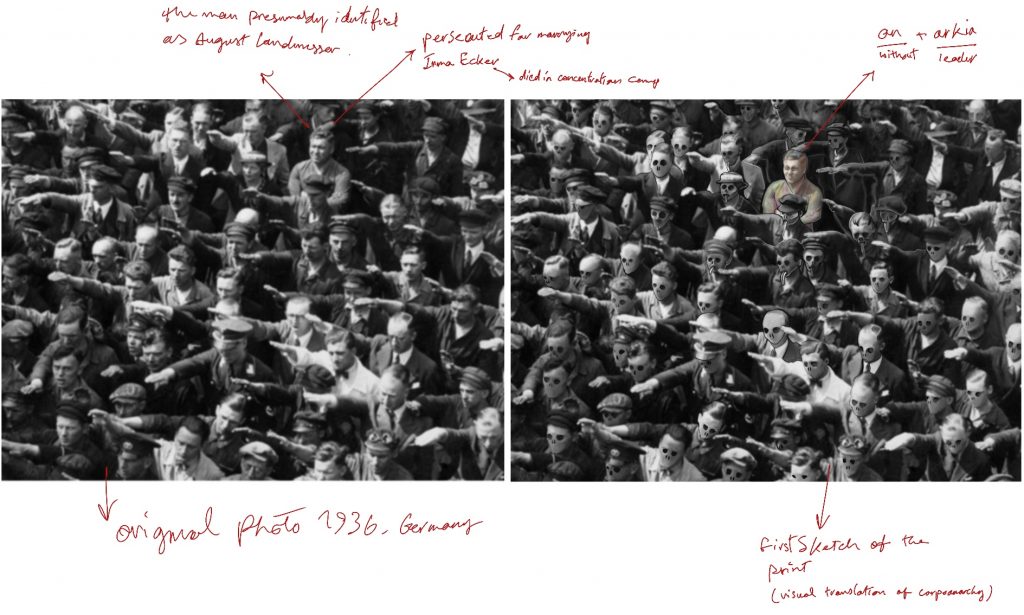 The main image in this exhibition was a printed piece of transparent textile, like skin, resembling a glossary page defining the meaning of this phrase, alongside a painting based on a historical photo, taken on June 13th 1936. The image presumably shows August Landmesser, a German citizen who refused to perform the Nazi salute at the launch of the naval training vessel Horst Wessel. Drawing on this historical photo, like a microscopic image, this project utilises this photo as a metaphor to visualize the corporeality of ‘corpoanarchy’.
It attempts to raise the question; what do we call such acts of refusal? Could it be resistance? persistence? or resilience? Or do we need another word to express such complexity? 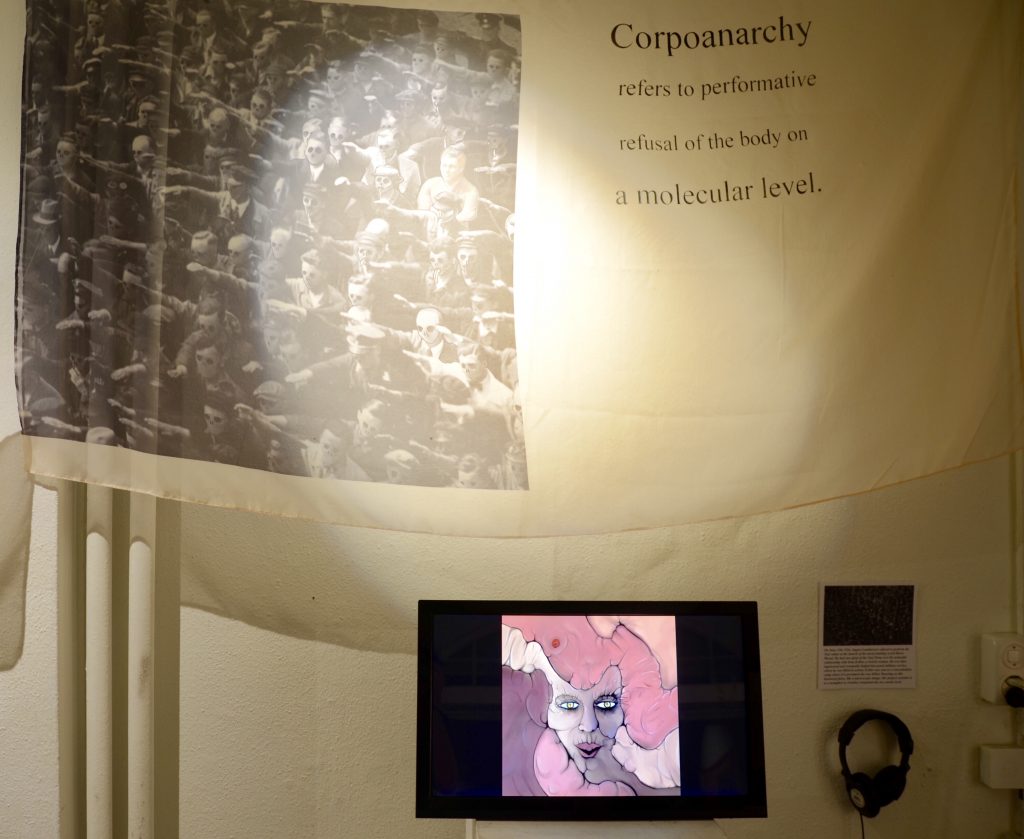 What is crucial in this work is the untranslatability of the word anarchy in Farsi. Etymology of the word anarchy goes back to its Greek roots Anarkia: ‘”lack of a leader, the state of people without a government’ (from an– “without” + arkhos “leader” ), however the translation of the word anarchy in Farsi is “chaos”. It is a fascinating gap which might accidentally reveal the history of Persia and Persian language: an undetachable monarchical history. From the Madian (650-330 BC) to the Sassanid empire (224-651 AD)to the Qajar or Pahlavi dynasties (1796-1979) and even the current history, there was never a period where the figure of king or leader has been eliminated from the social imaginary. Even the history of Persian literature is filled with figures of rebels and heroes who ‘lead’ the nation towards either freedom or peace. Could this explain the ‘untranslatability’ of the word anarchy in Farsi? And how history reveals itself in language, in a similar way to other missing words? For instance this issue is similar to the lack of a sufficient word to address transgender people or even simply the words, sex, gender and sexuality which more or less all have been addressed by one term; “Jensiat”.
“Some of the conceptual distinctions among gender, sex, and sexuality within the Anglo-American context, including the distinction sometimes made between transgender and transsexual (based on surgical modifications to the body), have been shaped over the past decades by the identity politics of gender and sexuality as well as queer activism and queer critical theory. Transsexuality in Iran has not been shaped by such developments” (Najmabadi: 2013). Therefore there is a collective scramble to address such concepts in contemporary history of Iran. 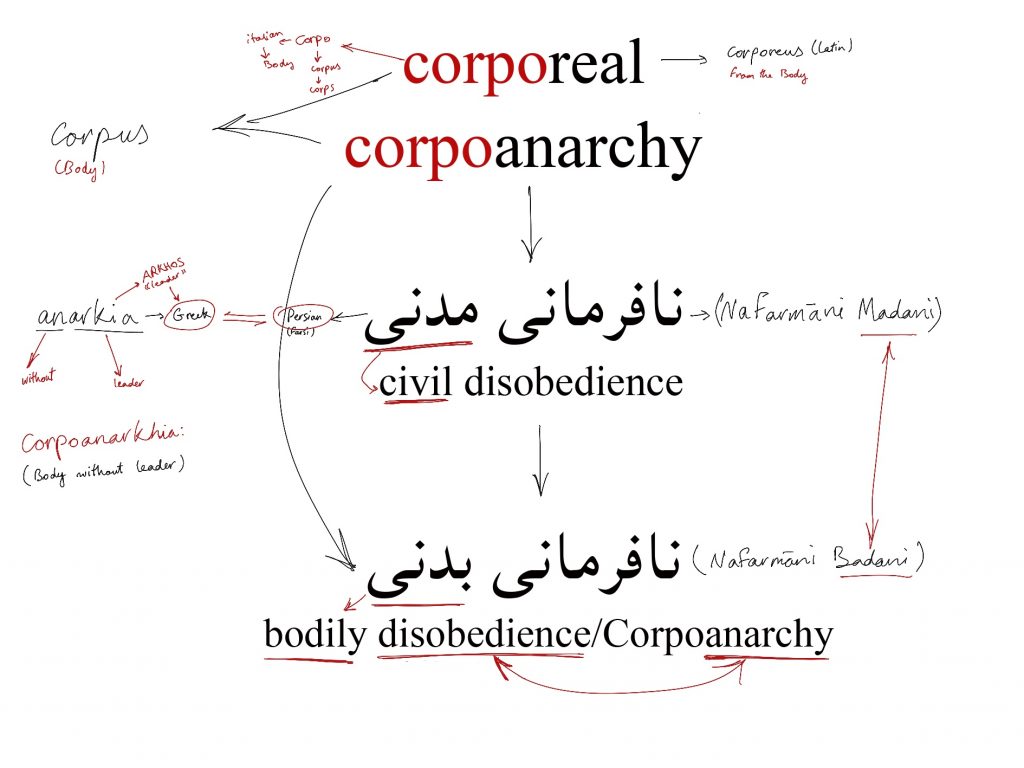 In this project corpoanarchy is translated as Nafarmani Badani, which is very similar to the phrase nafarmani madani which means civil disobedience, but instead the word civil (madani) is replaced by the word bodily (badani). At first sight this seems like a cosmopolitical word play between (Madan: cities and Badan: body), but at the same time it fits the meaning of the concept of corpoanarchy which has unfolded in the work “A room of her own”.

Nafarmani badani translates back to English as ‘bodily disobedience’ which might be the closest to the concept of corpo+anarchy(body without leader) as a form of civil disobedience but on a molecular level. The first volume of this interdisciplinary project was exhibited on December 2018 in Zurich with the aim of expanding itself as a platform to explore the concept of corpoanarchy through the lens of semiotics (translation) and somatics (performance).

Besides conversations with other scholars, there are bilingual essays and artworks related to this project and pointing out the problematics and untranslatability of the words anarchy, queer, sex or gender in Farsi and the social political impacts of these omissions within contemporary culture. Corpoanarchy suggests a rhizomatic way of dealing with such conditions through a series of performative (collective or individual) acts.