Elephant [in the room], was a research-based multimedia installation, (280 cm hight x 260×260 cm) as a painted performative object. Elephant speaks about the repression of queer bodies within the context of holy; bodies that this time instead of being rejected, segregated or marginalized by the idea of the holy, occupy and embrace the whole site as a peaceful protest. All figures are wearing masks standing “closeted” sometimes staring at the spectator, in order to survive. Inside the black cube, on several walls, in neon colour was written “this is a third space, where oppressor and oppressed can momentarily dance [being] together, free from the oppression itself”. Elephant silently speaks about the precariousness of (self) repression shared within a collective, a precariousness that we would rather not talk about. A precariousness rooted in a shared toxic masculinity. Even if someone points this out to the elephant, we would rather blame the person by pretending that the precariousness belongs to him/her, and not to ourselves. So the elephant in its essence reveals the game of hypocrisy: “You point out a problem and you immediately become the problem”. 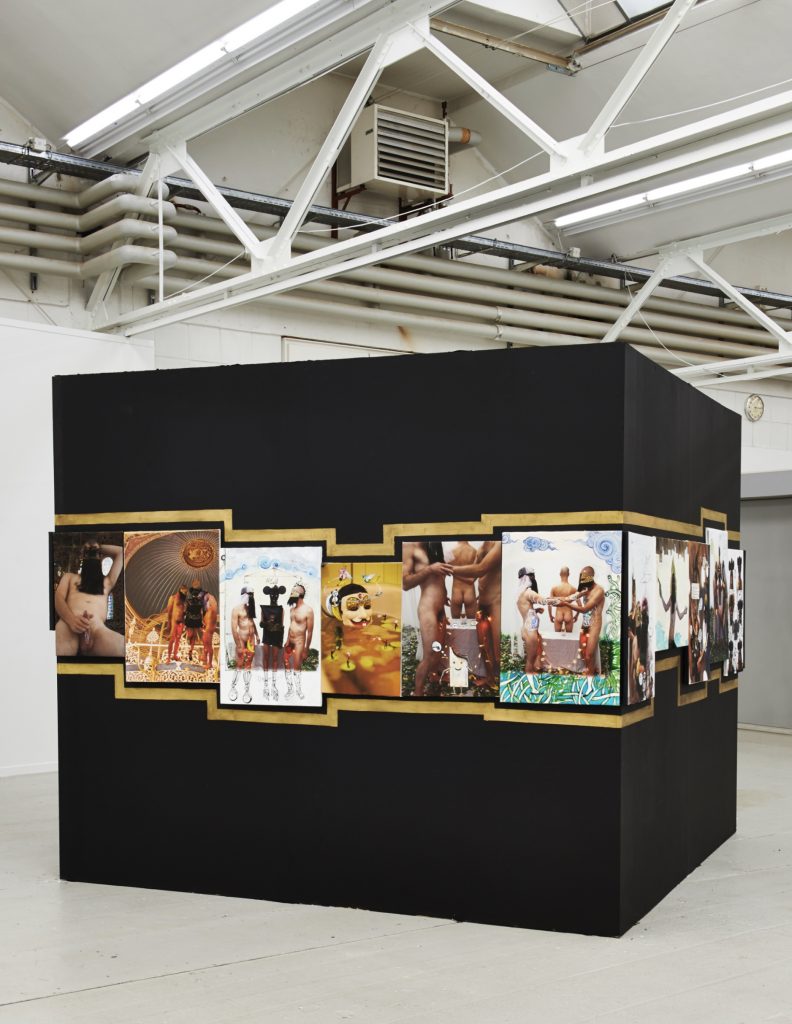 The whole imagery of the work represents queer bodies in the context of the holy, paradoxical and forbidden. Each piece is separate however, following the other piece and so completing an open ended story for the spectator like a constellational tale.  It includes the story of platonic love between Shams and Rumi (which we would still rather not acknowledge, alongside many other homoerotic texts in Persian literature). 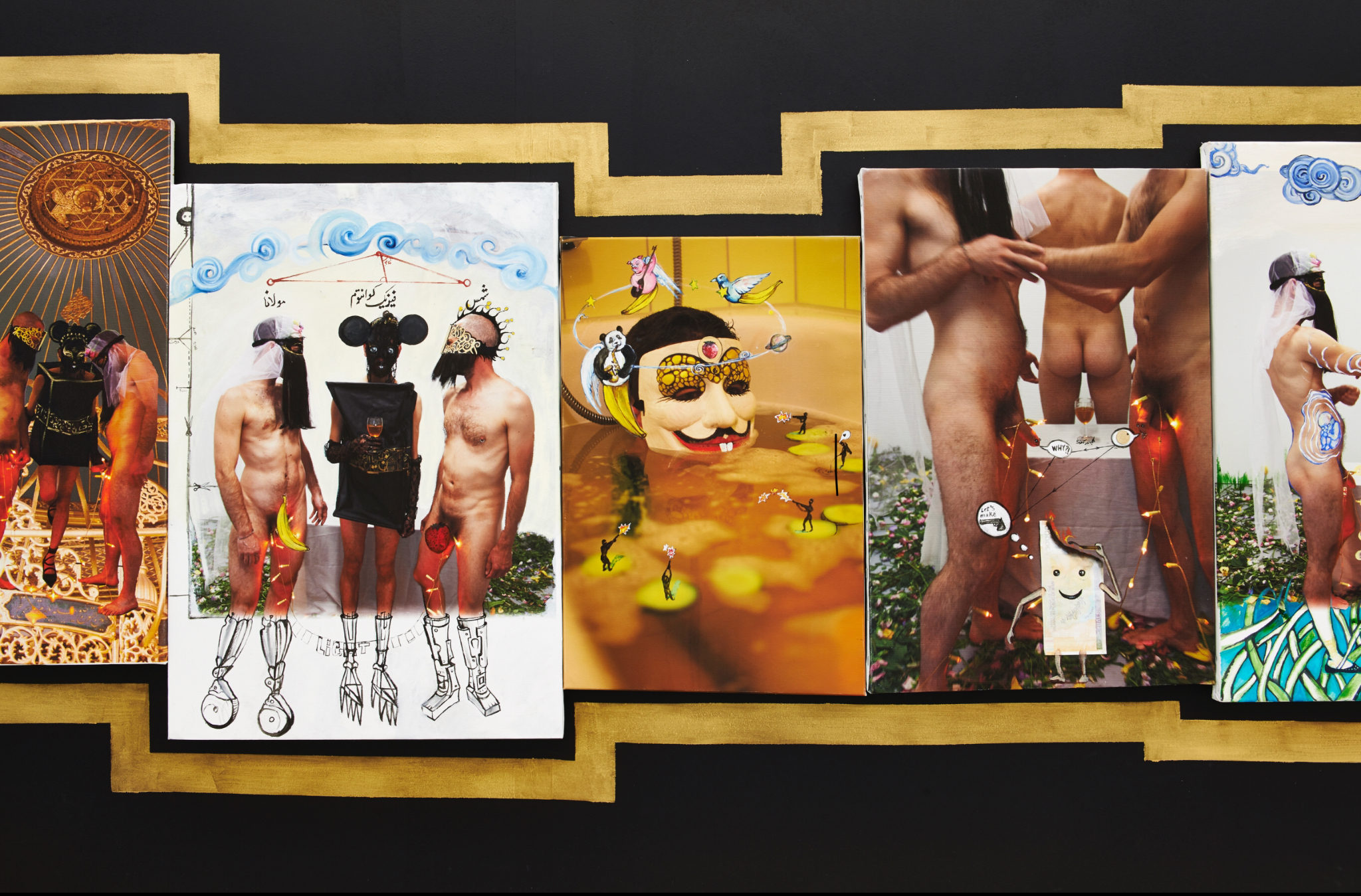 Over the last years this work became a reference for my research; why is such a performative object interpreted so drastically differently across diverse cultural backgrounds? Where is this collective anxiety coming from? I spent the last four years following how the work itself was being silently erased from different archives. It has been rejected by the discourse of homonationalits of course, because it imagines the world of inclusion! However, what is it about this piece that no one from either left and right wants to talk about it? Is it only about mirroring the shadow of our own precariousness? Would it be different if the author of the work was German, Russian, Chinese and not necessarily a queer born Middle Eastern? Is it even possible to be critical as a queer person with Muslim background without being misused by homonationalism? How do we construct a new world by acknowledging the colonial influences of the West in shaping the homophobia in the East? How do we go beyond this duality? Is it even possible? 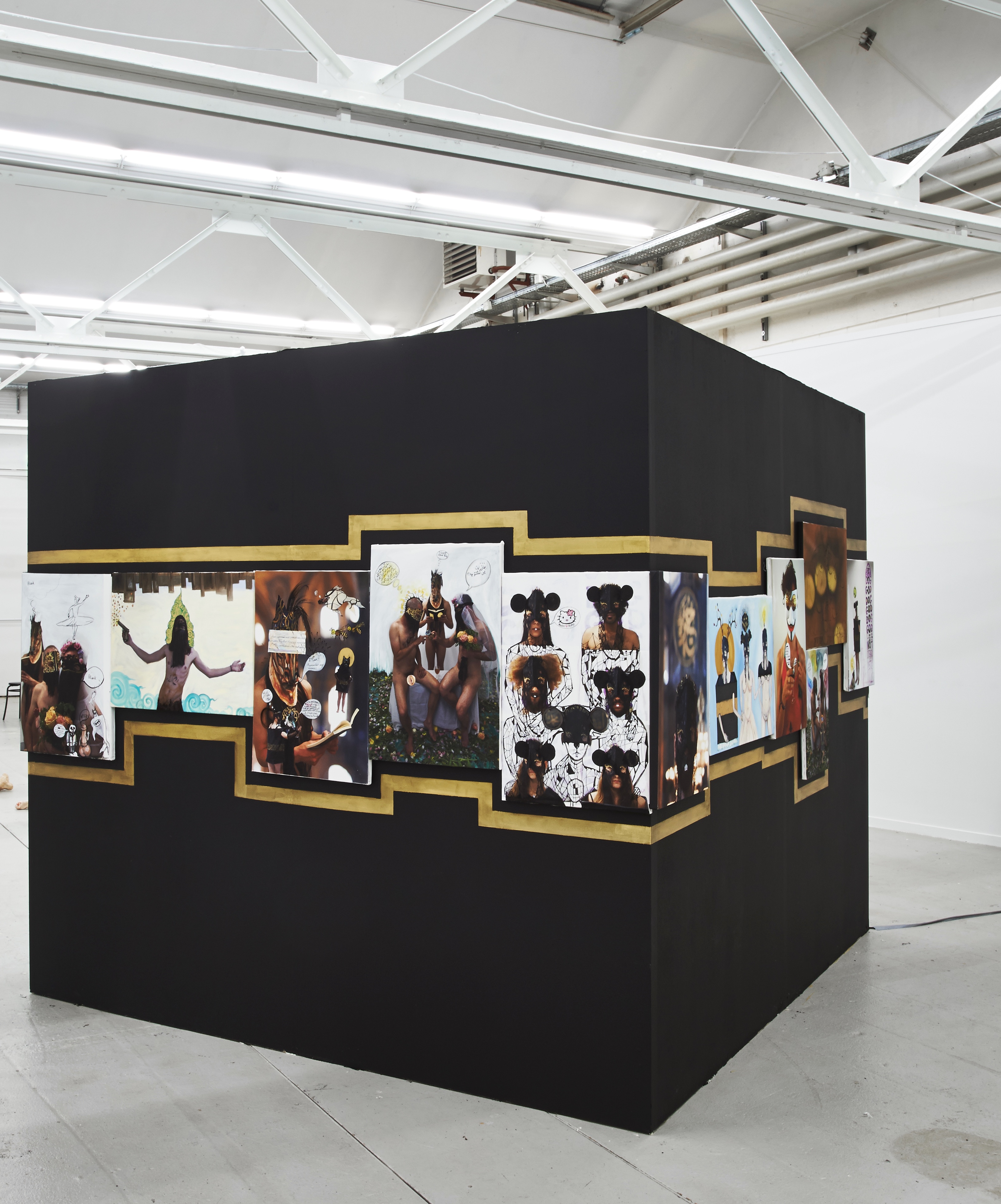 The form of the installation was influenced by the idea of the “Third space“  introduced for the first time by Homi K.Bhaba. The work tried to translate this imaginary of a third space into an impossible assemblage of juxtapositions of existence in a harmonious, humorous way, in order to raise a neglected discussion about where the body is located in a culture where representation of the body and sexuality, are narrowed and how the ‘lack of language’ to articulate such issues increasing the precariousness. How does such assemblage work in reality? Is it really possible? 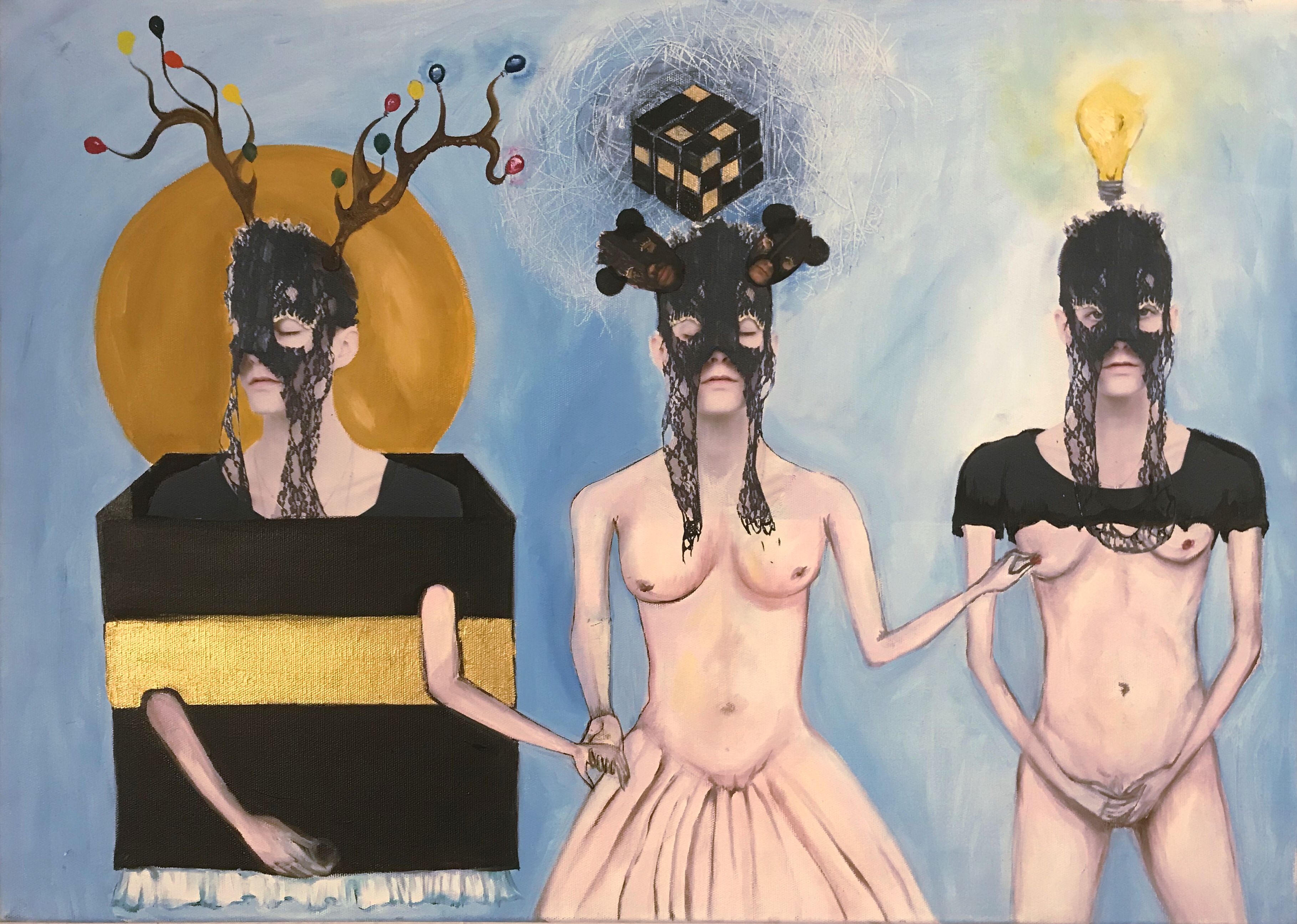 The story of the queer bodies, in this context, still remains like an elephant in a room: unspeakable words are all woven with fears and what is either forbidden to tell or being highjacked by the the nationalist or mainstream views. The imagery of this story superimposed on the cube, exposing a complex narration, free for interpretation. What strikes me the most was the experience of dealing with a work which was interpreted so drastically differently in different contexts and cultural repertoires. The elephant [in the room] was exhibited for the first time in Shedhalle Zurich(2014) as part of MFA Degree show. With Elephant I am pondering on the performativity of the object that encourages the audience to be the performer and act with their own presence or non-presence. In fact their neglect creates the concept. 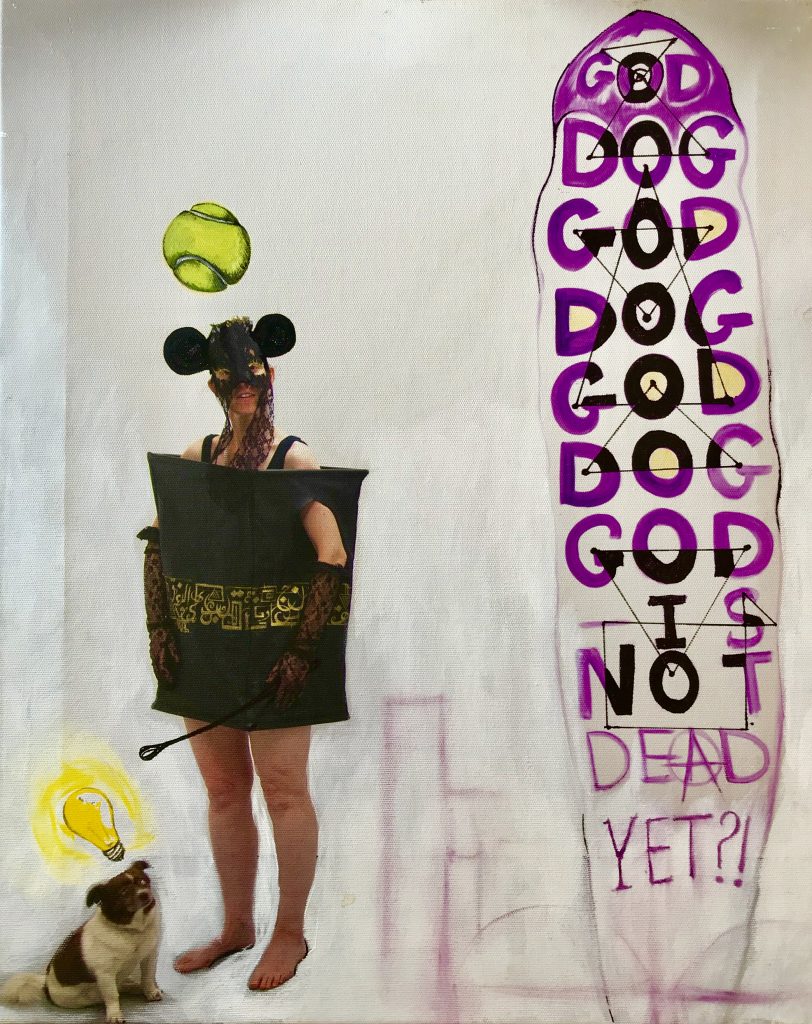 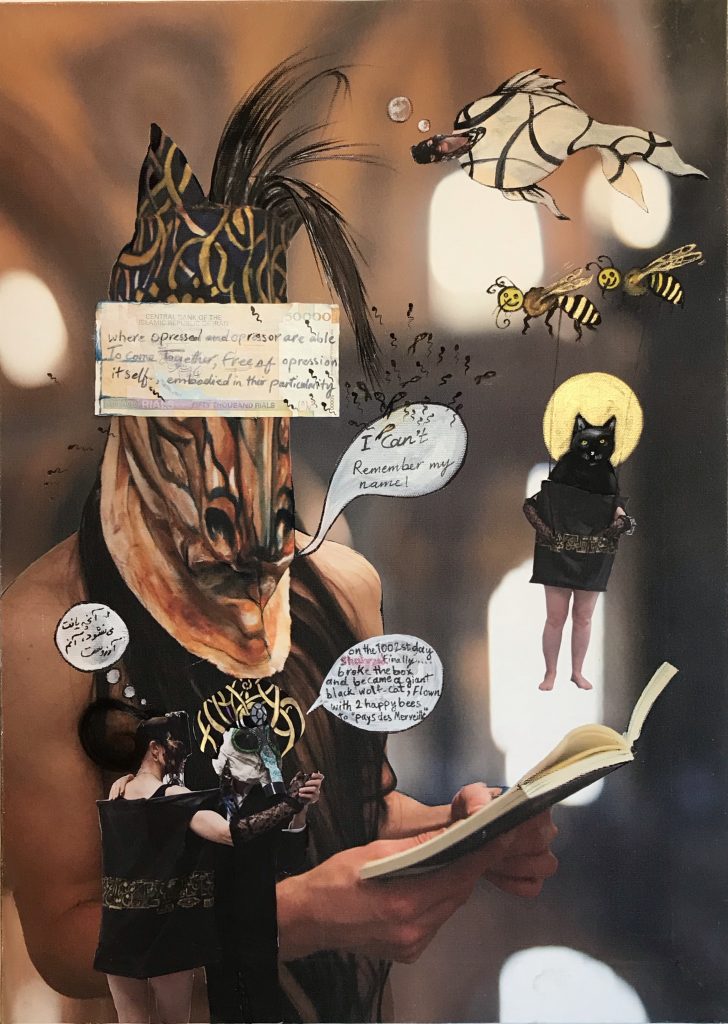 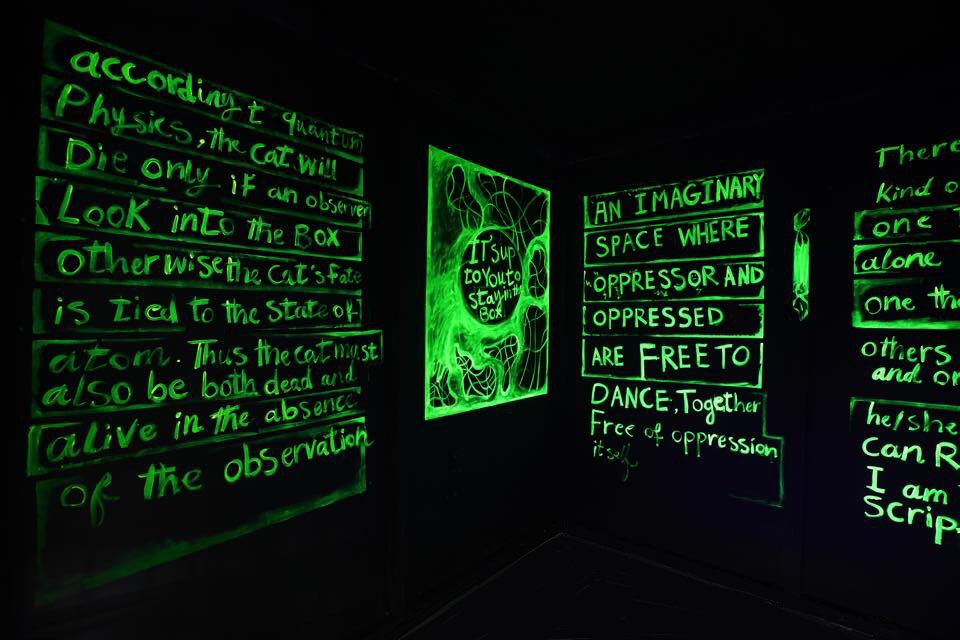 View: inside of the cube

“According to quantum physics the cat will die only if the observer look into the box, otherwise the cat’s fate is tied to the state of atom. Thus the cat must also be both dead and alive in the absence of the observer” 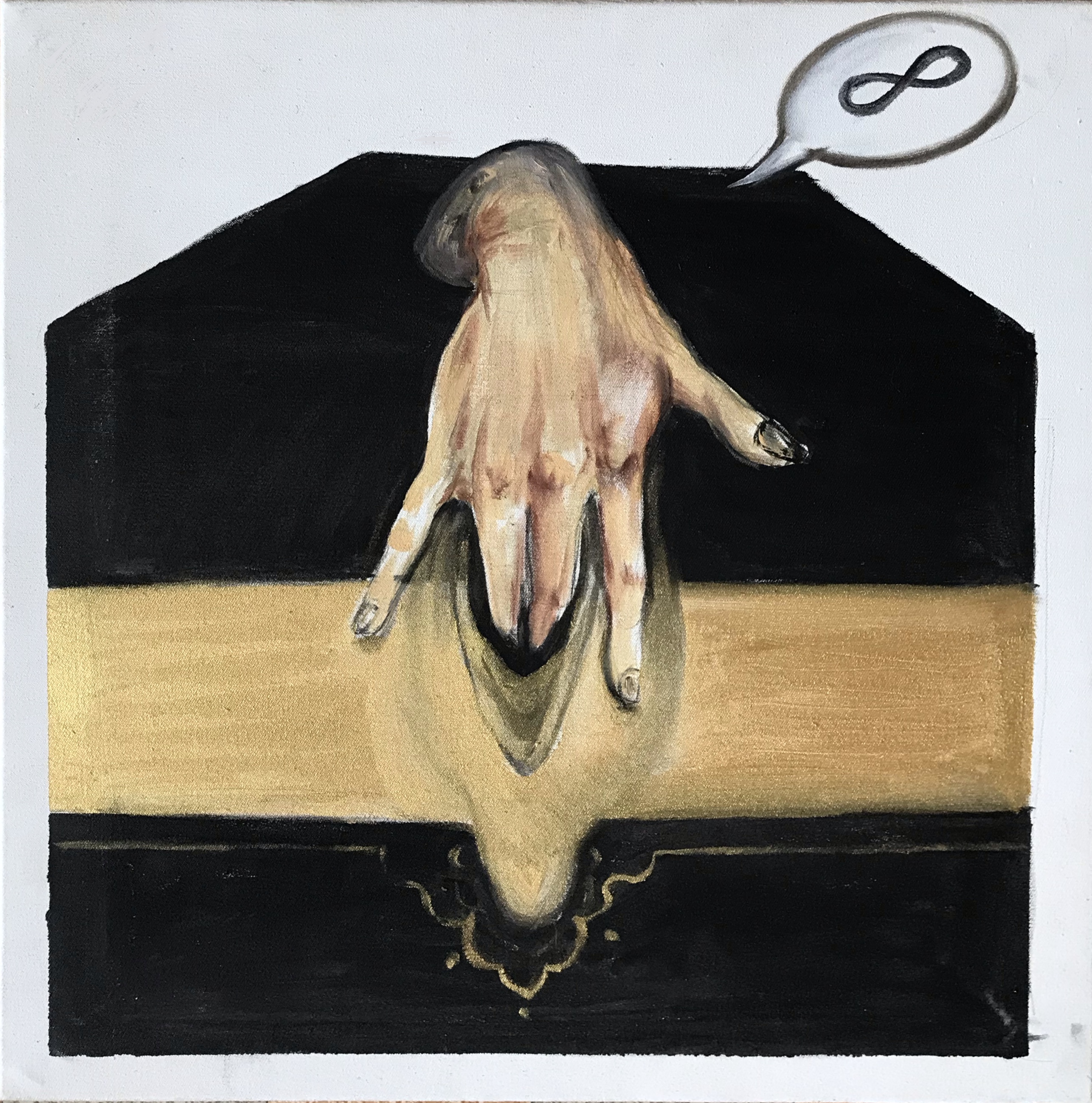